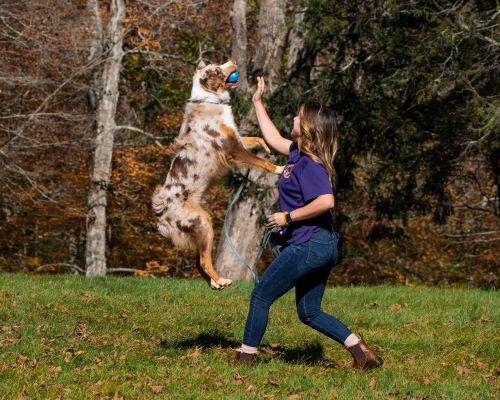 Dog Trainer Sam had the most unconventional start to joining the Mischief Managed Team! She had a degree in Animal Science from URI, but was not working in the animal industry for a while. She and owner, Jo, shared the same hairdresser and she is who connected Sam to the MM Team! Sam began by shadowing the team after this connection.

Same graduated from URI with a Bachelor Degree in Animal Science & Technology. She has worked at Roger Williams Park Zoo as an animal ambassador taking out trained exotic animals for guest to engage with. She was involved in giraffe and elephant feedings.

Sam worked in a vets office throughout high school, but did not wish to pursue veterinary school.

Sam grew up riding horses and became a camp councilor in the summer months teaching children how to ride as well as leading trail rides.

Sam works in our Day Training Program, runs her own group classes, and private lessons. She also runs her own small business called Pawsitive Choices LLC. From dog boarding to pet taxi!

Sam shares her life with Reef, an Australian Shepherd. She enjoys trick training and disc work with him!